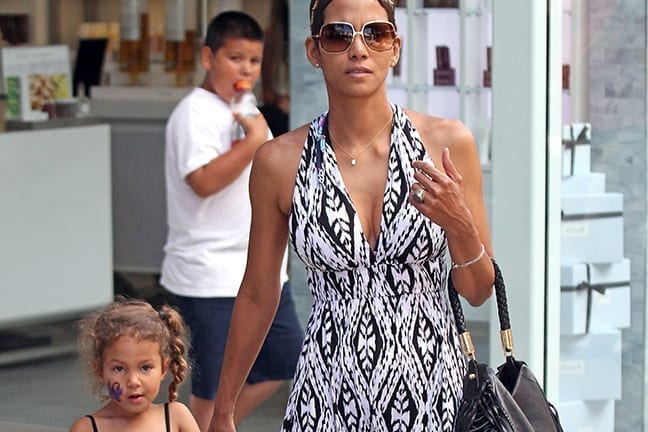 As the UK’s Daily Mail reported this week, Halle Berry recently took her white ex Gabriel Aubry to court over allegations that he was attempting to make their six-year-old daughter, Nahla, “look more white” by dyeing blonde and straightening her naturally curly hair. (Berry also accused her ex of using a racial slur against her.) The judged fairly ruled in Halle’s favor that neither parents can alter the child’s natural (and beautiful, if I may add) locks.

The responses to this matter have been varied. Many understand the dangers of chemical hair treatments and applauded Halle Berry’s decision to safeguard her child from them. Others think it is all simply a matter of Berry being “too sensitive.”However, for many — especially white people —  the politics of hair and skin color are an elusive matter. Why should the mixed-race actress care about how others perceive her daughter’s race? After all, is Halle Berry not half white? Her daughter 3/4 White? Why is this such a big issue?

Many understand race to be a social construct, but do not understand the implications of its construction. “White” operates more as a social status, than a reality of ethnic or genetic make-up, so simply being “half” or even 3/4ths white does not mean one will be accepted as “white.” To demonstrate this, we can look at examples of individuals who are both half white, but are classified differently by broader society. Actor Wentworth Miller, the “Prison Break” star was born to a Black father and a white mother. America’s first “Black” president was also born to a white/Black couple. Yet, Miller is classified as white while President Obama is classified as Black.

That is because there is an obvious difference between these two individuals: phenotype. Miller has clearly white skin, a shaved head (google photos of his childhood photos to demonstrate that choice) and green eyes, while President Obama has brown skin, kinky hair and dark eyes. These differences in outward appearance have long been used to measured “Blackness” and “Whiteness” and deny or allow individual’s access to the “White” world. This is such a common phenomenon that it has very well-known terms: “White passing” and/or “passing for White”.

With these facts clearly ironed out, we can return to the issue of Halle Berry’s daughter and the fight about her Black/White classification based on phenotype. Take, for example, an article published on Ebony.com earlier this year titled “I Hope My Son Stays White” which ws written by a white man named Calvin Hennick with a biracial son. In it, Hennick perfectly captured how white fear of a biracial child being labelled “Black” is very real, and perhaps with good reason. He wrote:

“I want my son’s skin color not to matter, but the truth is that it does. If he gets darker – if his skin eventually comes to resemble my wife’s more than mine – there will be consequences for him. People will fear him. Not everyone, but plenty of people, and he’ll never know who until it’s too late. It will only be worse if he wears a hoodie and sags his jeans, and so shamefully I also hope that he’ll be “culturally white,” following the trends of the suburbs and not the inner city.”

Taken in this context, the choice to dye blonde and straighten a six-year-old’s curly hair is not merely a benign, cosmetic choice. It readily displays such white fears that one’s child will too closely resemble Blackness and be cast into a world of second-class citizenry, forced to experience the negative repercussions of America’s system of racism. A biracial child that participates in the world as “White” or “White passing” will be less burdened by racism — and perhaps Garbriel Aubry is consciously aware of that fact. Or perhaps he has simply internalized that understanding.

Either way, Halle Berry has every right to criticize his attempt to alter his daughter’s appearance — namely that changing her hair will cause “potential psychological and physical damage” and cause Nahla to wonder “why her natural appearance is not good enough.”  If Aubry truly feared her “Blackness,” he should have never had a child with a Black woman.Related Stories:Why I Chose To Go Natural With My HairThree Low-Maintenance Hairstyles For Natural Hair