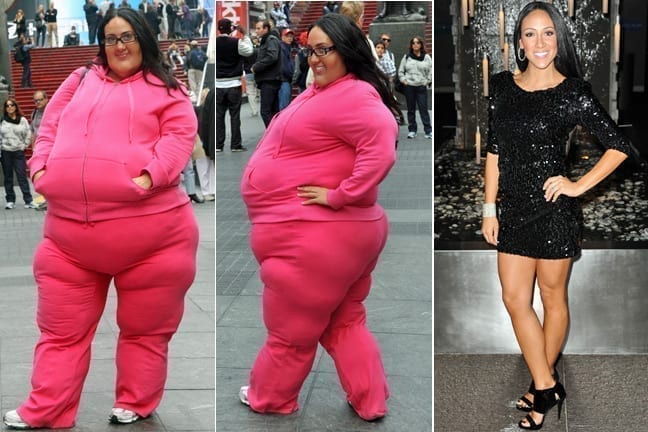 Real Housewife of New Jersey, Melissa Gorga, has done a lot of crazy things on TV for ratings, but last night, she pulled off her biggest stunt yet—no pun intended.Gorga transformed her body with 400 lb. fatsuit, which she then squished into the skin-tight sausage casings of a pink velour tracksuit.It was all part of an Entertainment Tonight “special report” to get the pint sized star to find out what it’s like to be nearly three-and-a-half times bigger. Her ensemble for the social experiment was a far cry from her advertised weight, 115 lbs., and an even further cry from her typical coiffed look.The Jersey girl had on no makeup and an unflattering, unfashionable outfit. Heck, she wasn’t even wearing a bra! It’s no wonder the reality star broke down in this artifice wailing, “What is this?” as she picked up her fabric rolls.MORE: Is Fat-Stigma Skewing Your Weight Perception?According to ET, 69 million Americans are obese. But Gorga argues, “Fat is also a feeling.” And that’s precisely why she wanted to go under cover, because so many women, no matter their size, struggle with weight issues. It’s so pervasive that a study by The National Heart, Lung and Blood Institute found 40 percent of girls between the ages of 9 and 10 years old have already tried to lose weight.Gorga confessed that once she was zipped into the fatsuit, “The second I looked in the mirror, I instantly felt like I lost a little bit of self-confidence.”And it was all-downhill from there. While wandering the streets of Manhattan suited up, she got stuck going through a subway turnstile, had a hard time getting out of a cab, and even endured teenagers asking things like, “Damn, how much do you eat?”Mary Jo Rapini, LPC, a health counselor who specializes in obesity and was the psychotherapist for TLC’s “Big Medicine” points out, “Obesity is still one of the ways you can bully and it seems acceptable by our society.”QUIZ: See Where You Fall in the Healthy BMI & WHR RangeAnd she argues a television segment like this one just adds to the fat shaming problem. Or as Rapini notes, “When you think of it, we would never do this [kind of social experiment] to a person in a wheelchair. We would never have an actress ride around in a wheelchair all day and act like she has cerebral palsy or MS.” But we all know, they get stares and are treated differently, too.With thin celebrities like Tyra Banks, Vanessa Minnillo and most recently Melissa Gorga masquerading as obese women, perhaps the real big question is: Why are these fatsuit exposés so socially acceptable and even seen as sympathetic?QUIZ: Do You Fat Talk ? Find Out for a Better Body Image.